My dream vision of a US road trip is a long, straight road receding to a vanishing point on the horizon under a vast sky. It’s something you never get in the UK, because there’s always something in the way (like the Chilterns, or Birmingham). For long stretches the view changed so little, it didn’t quite feel like we were travelling across massive distances. My brain probably didn’t adapt to the scale of the geography.

Mojave National Preserve
Lingering jetlag meant we woke up at Barstow earlier than intended, so we hit the road under a moonlit pre-dawn sky and enjoyed the sunrise over the desert, with distant hills and mountains silhouetted against the orange glow, before turning south towards Cima.

I’ve been fascinated by Joshua Trees since I first saw a picture of one in a New Scientist magazine in my teens; it looked utterly alien to me. They’re only found in the Californian desert, and the Mojave National Preserve has an entire forest of the buggers. The whole desert was green and lush.

Our kitchen at breakfast…

We stopped for breakfast at the White Cross Memorial in the middle of the Preserve (arriving just as a solo traveller from Colorado was packing up her camp and heading out; I had the nagging feeling she was an introvert fleeing our presence). Starting the day with bacon, eggs, toast and tea in the desert is a bucket list item I never knew I had.

Continuing through the Preserve, we passed tiny settlements (Cima, Kelso) along roads that followed a straight line over every bump and contour, in a landscape fringed by sand-coloured hills and jagged rocks. What was it like to live here? Where did people commute to work? I couldn’t imagine it.

We tanked up at Needles. I found that there wasn’t any way to plug my MP3 player into the car, so we were deprived of our music. I looked for CDs in the gas station, but the only offerings were the sort of music you’d need a lobotomy to enjoy (the sort of genre that sounds like “Murrica You Done Gone Make Me All Proud, sung by Hank Wanker” – that kind of thing). So we decided to make do with a mixture of mellow silence and occasional conversation.

Gas cost $3.89. Once we crossed the state line, a long line of vehicles pulled off the next exit to a gas station where it only cost $2.75. And boy, did we feel like a pair of assholes. 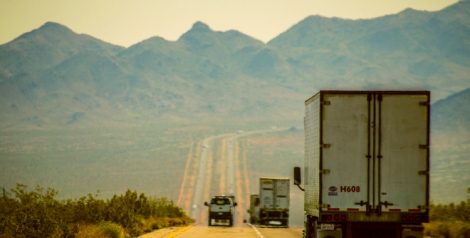 The road goes ever on and on…

Arizona
After brunch at Kingman, we had a lot of long, straight highway to drive along, which gave us plenty of time to ponder crucial matters such as:

The first view we had of Grand Canyon. It did not disappoint!

Grand Canyon
We arrived at Mather Campground mid-afternoon and got the free shuttle to Grand Canyon Village. We walked up to the railing and found that the cliches are true: when you first see it, it takes your breath away. Your brain needs a moment to process what it’s seeing, and then you realise the sheer scale and depth of it all. Then you say “WOW!”

We had two full days to enjoy the canyon, and made as much use of them as we could. The first day we drove to Yavapai Point before breakfast so I could get some sunrise photos; we got another shuttle bus to South Kaibab Trailhead and walked to the aptly-named Ooh-Aah Point, having decided the temperatures were forecast to be too hot for us to go much further down into the canyon (we didn’t want to knacker ourselves with heatstroke when there was so much more to follow).

We also met a couple who’d been walking all the way from the Mexican border back to their home in Utah. All they had to do was cross the Colorado River and they’d be back in their home state. They weren’t carrying much – just light travel bags – and were going to spend a night down by the river. The guy looked like he was auditioning for a ZZ Top tribute band; they’d been on the go for weeks. 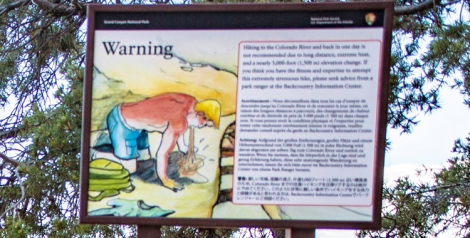 It’s amazing how many people ignore these signs.

There are warning signs put up by park rangers telling people not to risk their health attempting to walk down to the river and back in a day; people have died trying (and I guess nobody wants to retrieve a corpse that’s been in the sun all day). The signs are illustrated by a cartoon that looks like me reacting to a JJ Abrams interpretation of a beloved science fiction franchise.

Yet, on the way back up, we met a young couple asking if it was far to the river. They had t-shirts, shorts and a half-empty water bottle each. I told them about the temperature forecast, the distance, the elevation, and the ranger warnings about bringing plenty of water and salty snacks (to replace everything you sweat out), and they both went wide-eyed and white (a bit like us in Los Angeles, I guess), before deciding on a more modest hike.

A visitor to our campsite.

We enjoyed a quiet afternoon (I visited the Kolb museum, about the first photographers and movie-makers to visit Grand Canyon) before dinner, interrupted only by a family of elk passing right through our campsite to drink from puddles under a nearby tap. In the evening we drove back to Yavapai Point so I could get some sunset photos and shots of the stars over the canyon before moonrise.

There were a few others there too, including a husband and wife on a three-week photography road trip (it was great comparing notes with them), and a rather desperate Austrian woman on a bus tour who wanted to tell us all about the horrors of travelling with a load of other middle-aged Austrian women (she made it sound like a mobile prison), and show us every single photo she’d taken. Clearly she was desperate for someone – anyone – else to talk to.

The canyon looks great any time of day… or night.

After the best night’s sleep we’d had on the trip so far, we spent the next day walking along the canyon rim from Hermit’s Rest back to the village. The shuttle bus driver on the way out was one we’d had before (I think he uses the same jokes on every journey).

The walk was pleasantly green with butterflies, birds and critters scampering about, and gaps in the foliage providing epic views of the Colorado River far below. The trail is on the edge of two different ecological zones, providing a wide variety of trees and flowers mixed together. The elevation here is over 7000 feet (well over 2 kilometres). Being coast-dwellers, we were gasping for air a little.

When you glimpse the Colorado River, you realise how high up you are…

The trail joined bus stops every so often, disgorging tourists who either didn’t have the time or inclination to walk the whole trail. After having so many sections to ourselves, it felt like these other folk were intruding and occasionally ruining the peace.

It took a lot of willpower on my part not to tell her she was making far more noise than her daughter was. I saw them a few minutes later taking a family photo on top of the Powell memorial, with mom, dad and brother looking serious, and the girl with tears streaming down her face. What a lovely, treasured memory that will be.

Powell Point, where they ought to raise a flag in my honour, emblazoned with the words “Please form an orderly queue.”

At Powell Point itself, it was chaos as tourists of every nationality jockeyed for position to take selfies and group photos against the backdrop of a truly spectacular canyon view. Rather than join the lunatic scrum, I waited for them to finish before going onto the outcrop to take a panorama shot. When I turned around, I found I had done that most classically British thing: I had started a queue, and people went to the outcrop one group at a time for their photos.

I had brought civilisation to the Grand Canyon. God, I’m good.

Click here for more photos taken on the road!

Click here for more photos of Grand Canyon at sunrise!

Click here for more photos of Grand Canyon at sunset and night!