Every year, when the Inktober prompts are revealed, I go through the same sequence of emotions: anticipation, curiosity, a prolonged bout of puzzlement as I try to figure out what to draw for each one, a minor downer as I realise I should scrap a bunch of ideas that I’ve done before/ are too obvious/ are too obscure, and then a hint of elation after I figure out what to do each day.

This year, I realised that my usual mixture of pop culture references were out (it would get repetitive), and I’d have to resist the temptation to make each sketch political (‘poisonous’, ‘chicken’, ‘drooling’, ‘cruel’, ‘weak’, ‘breakable’, ‘drain’, ‘expensive’… too easy!). I was stumped. 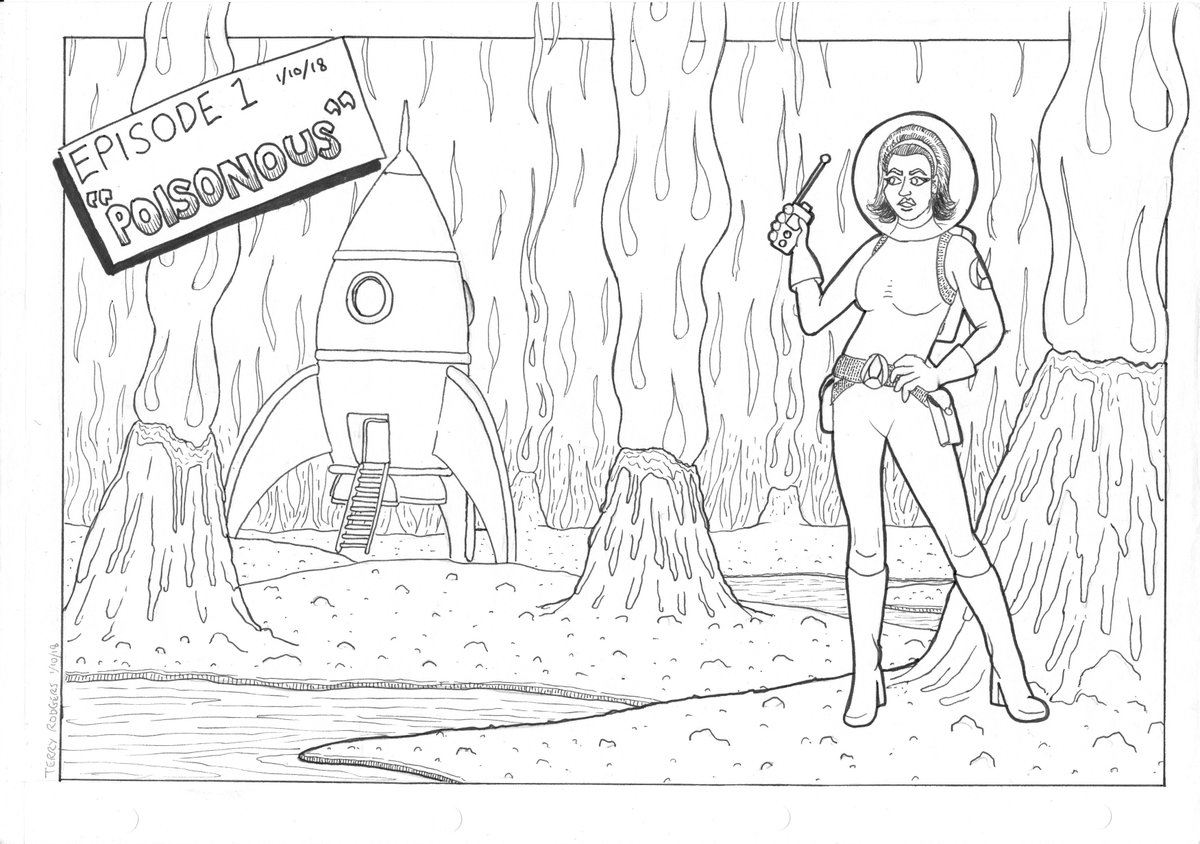 However, there was a character I’d scribbled up and coloured in over the summer which I wanted to revisit, inspired by kitsch 1950s and 1960s science fiction. Perhaps I could do a serial based on her, and fill out the crew of her spaceship, and add a bit of detail to her universe?

Various inspirations: an old sketch of mine, and childhood science fiction…

I created a ‘sergeant’ character inspired the puppet character ‘Barry Hercules‘ in an old Japanese kids’ show called Star Fleet which I watched religiously every Saturday morning. I based the captain on a Japanese astronaut I’d drawn a few years ago. And I wanted the antagonists to look like a bunch of stuntmen in crap costumes.

My original thought was to make each prompt word the title of an episode in this imagined sci-fi serial, but I started thinking more broadly.  If it was inspired by old TV shows, then I could show the cast out of costume and out of character behind the scenes. 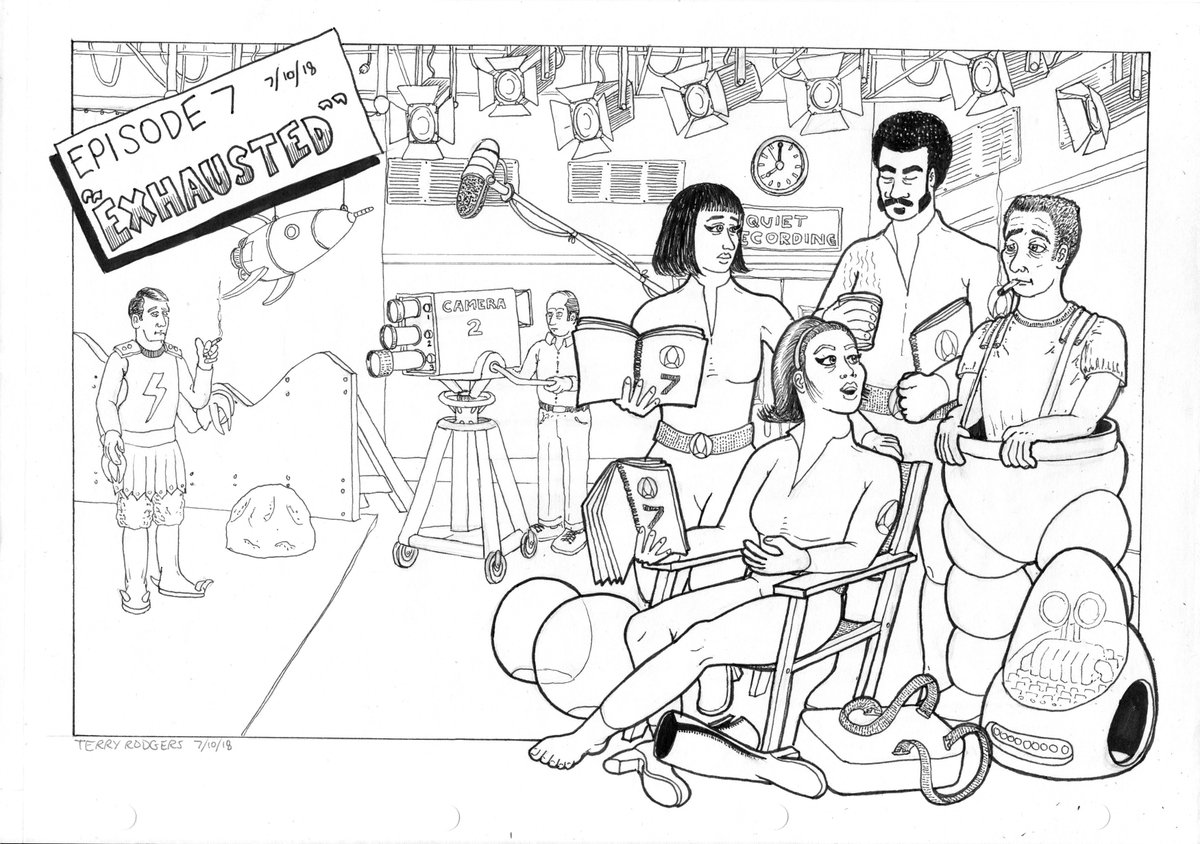 When I drew the guy inside the robot costume, he looked a little worse for wear – based on a story I’d read about the ‘Robbie The Robot’ performer in Forbidden Planet breaking the costume when he fell over in it, after a few too many lunchtime martinis. This then led to the idea that the actor in the robot costume would be fired and the character written out of the show. 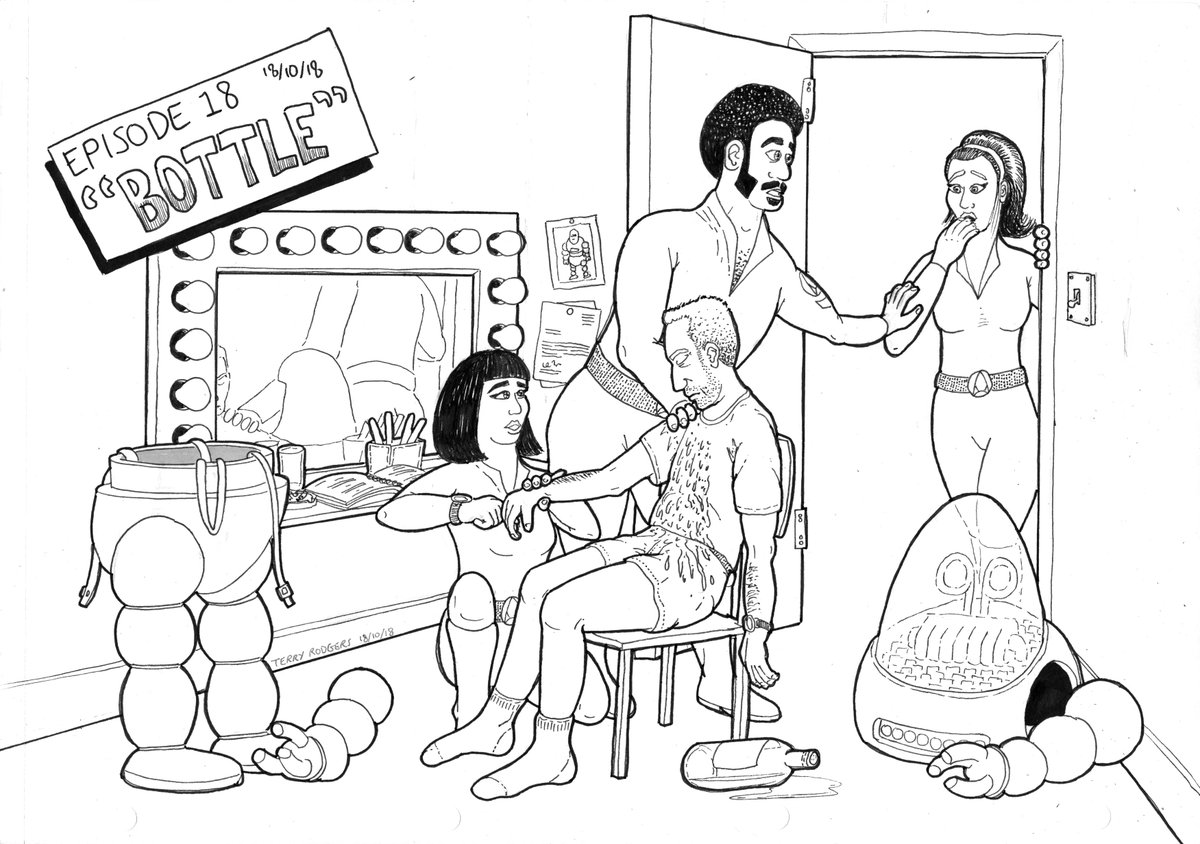 By this point I was starting to care about the characters, and their performers. I’d created a show which (in my mind) I wanted to see myself. I’d also come up with a scene in a 1970s science fiction convention, and had a small girl meeting her favourite actress, trying to mimic the costume as best as she could. I thought it might be fun to follow the girl as she grew up, daydreaming about being in space, and hanging out with fellow nerds. 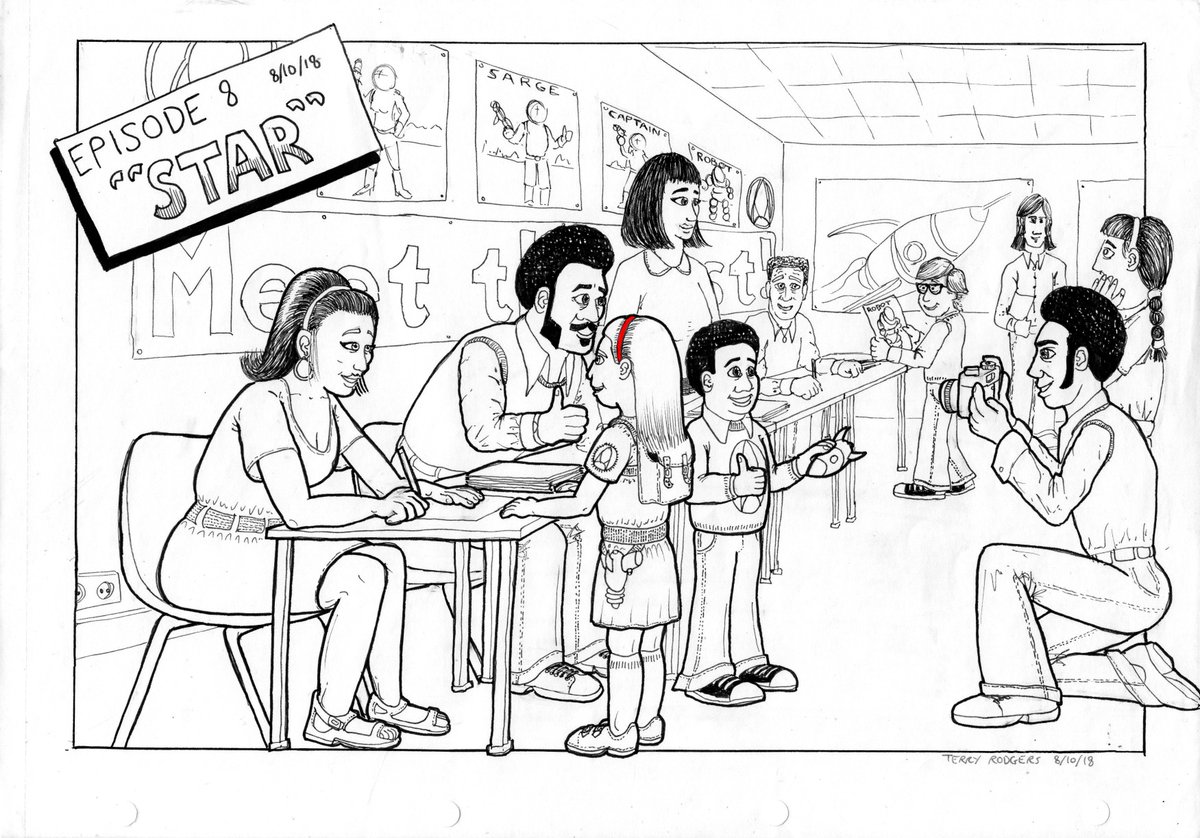 I allowed myself a few moments of indulgence – with Brexiters and Donald Trump – on the grounds that if anyone represents the antithesis of the idealistic, happy, one-world, united Star Trek future, it was them. 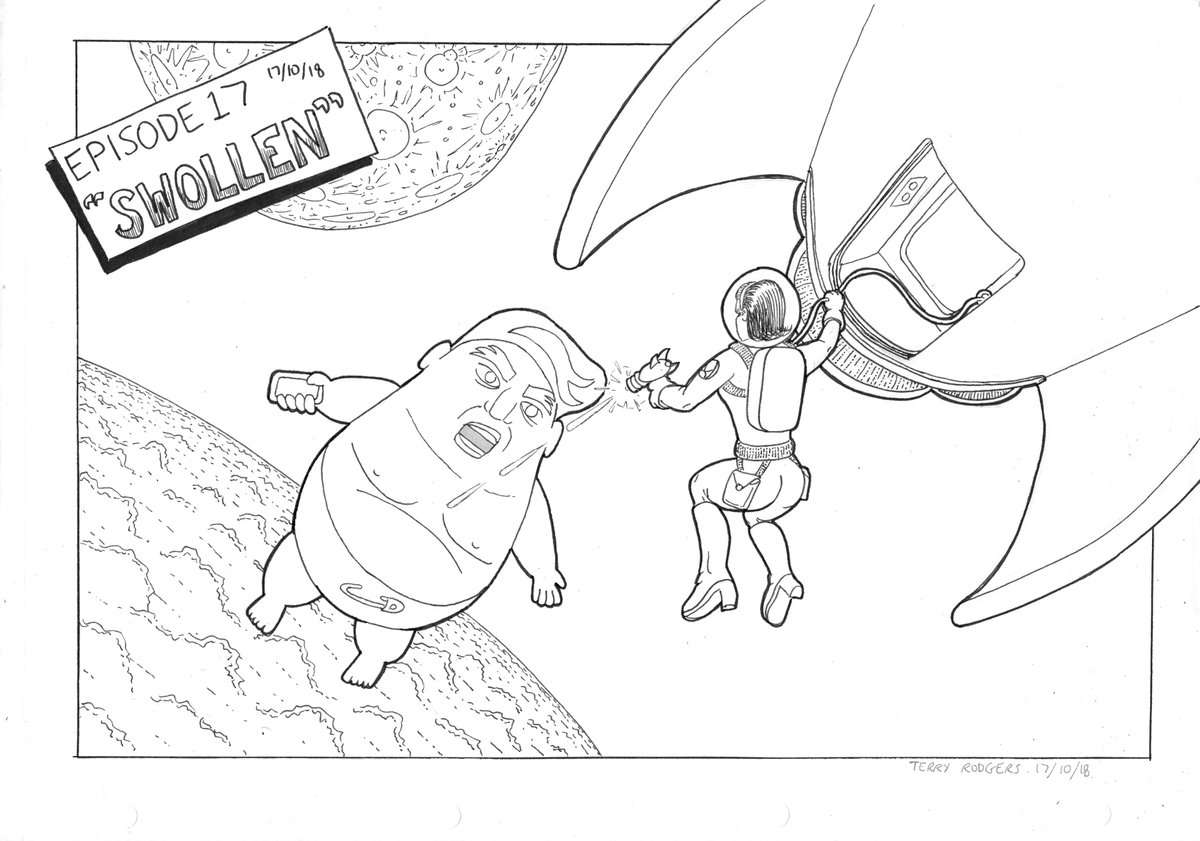 Ultimately, I wanted to bring all the various characters together for some sort of happy ending, and decided to skip forward a few decades: the kids from the 1970s convention were all grown up, with kids of their own, to see the now-elderly cast reunite. 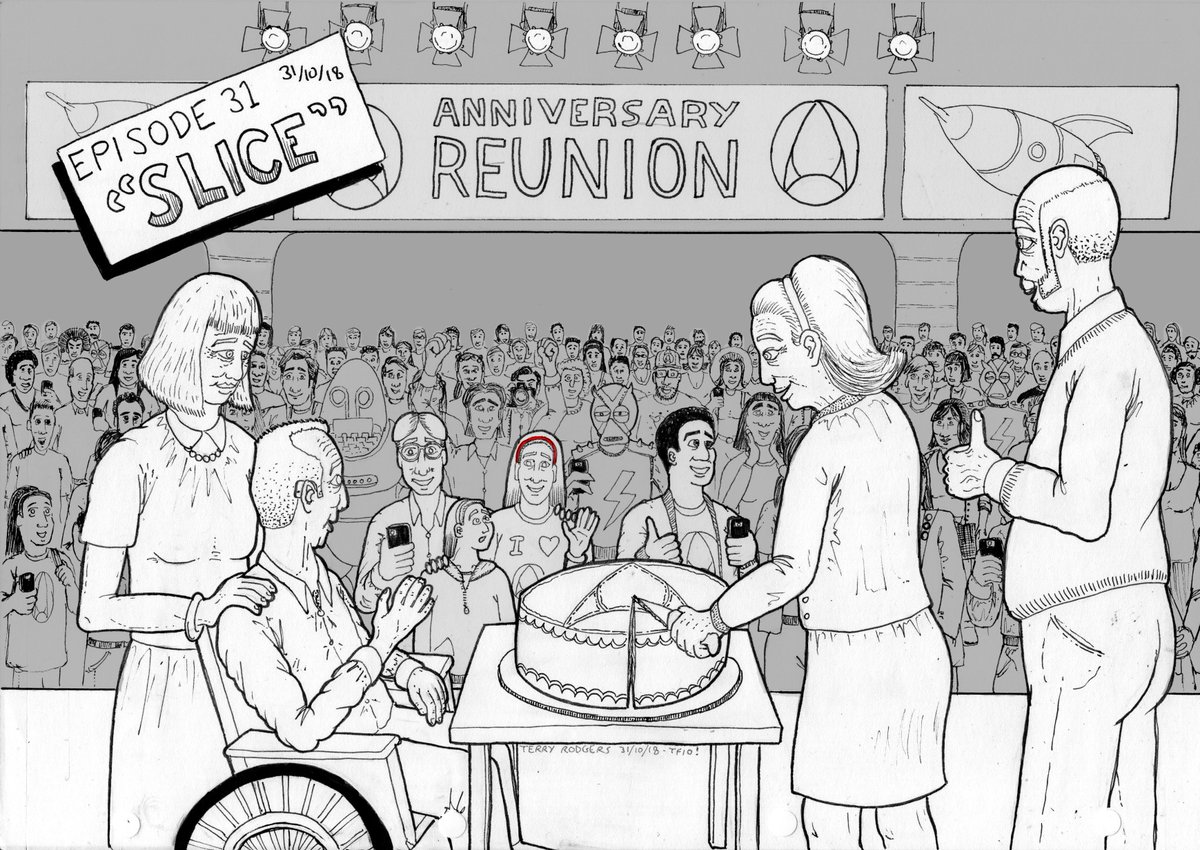 From a technical, artsy perspective this year was challenging in a couple of ways. For one thing, I was using A4 paper instead of a small Moleskine notebook, so the pictures could be larger and more detailed.

The biggest single problem I had was drawing faces (but I knew that last year). The main character – whose name I never did figure out – was easy enough to get in broad details (hair, makeup, costume), but her face is completely inconsistent from one image to the next (or even when she appears twice in the same one!); her age and weight both yo-yo up and down, and her eyes never appear in quite the same place twice. The same is even more true of her captain (to me, she was the least interesting and therefore least developed).

So: I’m comfortable enough doing scenery, objects and little details, but I know where my weaknesses are (still), and that’s something to work on next year…

I’ve also got a sneaking suspicion that these adventures might fuel next year’s NaNoWriMo. I’m not done with this little universe yet! 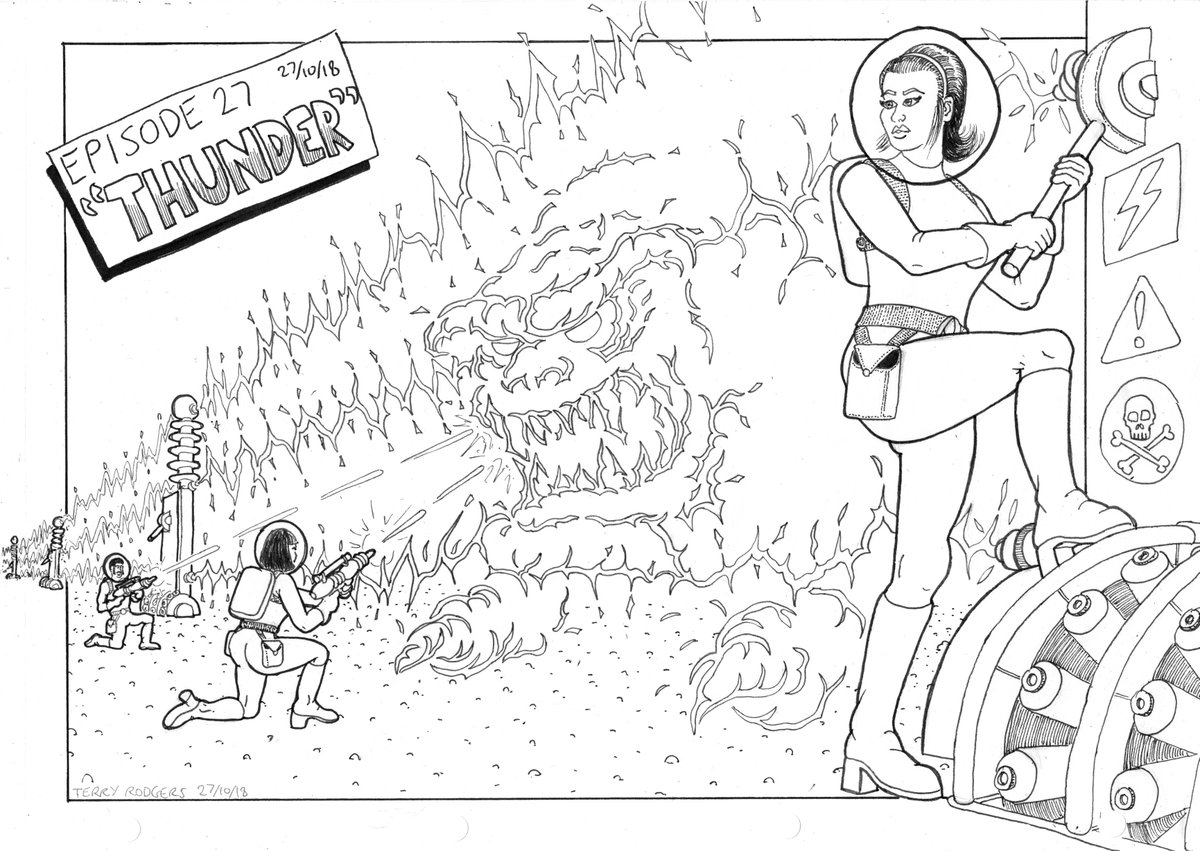 This year’s sketches can be found in order here: